The ship was provided with weather-routing information indicating rough weather in the Arabian Sea on the 17th June. Voyage planning was performedto meet the required arrival time at Jeddah of 0000 on 20th June based on an average speed of 18 knots. The exception to this average was to be in the Internationally Recognised Transit Corridor (IRTC) where maximum speed was to be adopted as an anti-piracy measure.

In the early morning of the 17th June, in reported weather conditions of 38 knots (19.5 m/s) wind speed and 6m wave height, the engine speed was reduced to 79 rpm. At about 0745 hours local time, in position 12°30’ N 059°58’ E approximately 430 nautical miles off Salalah, Oman, the ship was hit by two large waves on the port bow. The bridge watch keepers
immediately noticed that the ship was hogging in an unusual manner.  Investigations by the Chief Officer and Chief Engineer revealed water ingress into the pipe duct keel space, No.6 hold and fuel tanks and the Master concluded that the ship should be abandoned for the safety of the crew. Distress messages were sent and the ship was abandoned at about 0945 with all crew embarked in one lifeboat.

The ship Yantian Express (IMO 9229831) was approximately 24 nm away from the MOL Comfort when the first distress message was received at 0900 and it proceeded immediately to the scene. A cargo net was rigged and the lifeboat manoeuvred alongside but the rescue operation was complicated by the presence of floating and semi-submerged containers.

In attempting to climb on board a number of crew members of the MOL Comfort fell into the water and needed to be saved by the use of lifebuoys. However, all 26 crewmembers were finally retrieved on board the Yantian Express by 1136. At approximately 1148 the MOL Comfort broke into two parts which commenced drifting away from each other. The Yantian Express then left the scene and continued on its voyage east-bound. The rescued crew members of the MOL Comfort were landed at Colombo, Sri Lanka, on the 20th June.

Salvage teams were dispatched to the scene of the casualty and a tow was established to the fore end on the 26th June with the intention of retrieving the section to a suitable port.  However, attaching a tow to the after section proved extremely challenging and it eventually sank in position 14°25’50” N 066°26’18” E on the 27th June along with approximately 1700 containers and 1500 tonnes fuel.

Meanwhile the fore section was under tow towards the Gulf of Oman at slow speed until 2nd July when the tow line broke. The tow was re-established and the towing resumed but in the morning of the 6th July fire broke out in the fore section.

Despite fire-fighting efforts from the salvage vessels and an Indian Coast Guard vessel the fire continued unabated and the fore end of the MOL Comfort sank on July 10th in position 19˚56’29” N 065˚24’45” E. 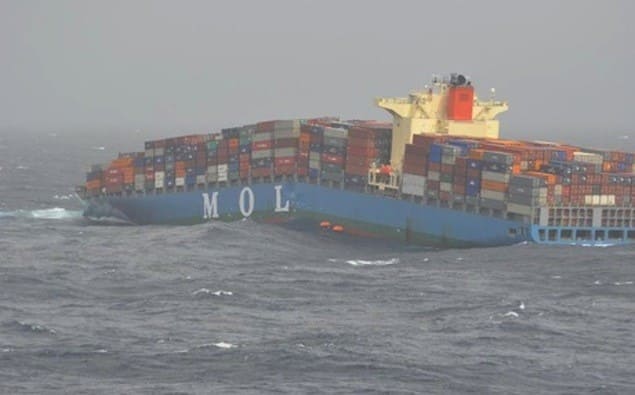