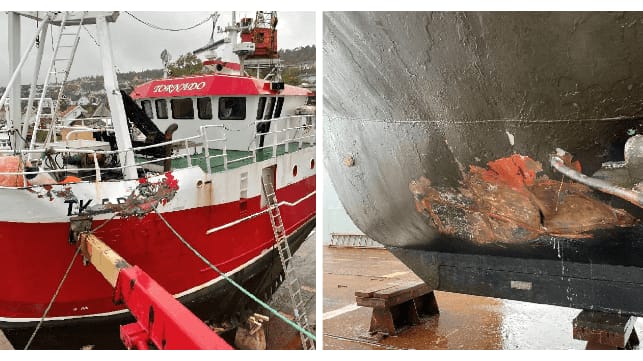 A recent run-in between a coastal freighter and a fishing vessel off Norway nearly ended in tragedy, in part because the trawler’s crew disabled their AIS, according to Norwegian safety regulators.

On the morning of October 4, the coastal freighter Edmy departed the port of Larvik, bound for Copenhagen. The harbor pilot got off at the pilot station off Porsgrunn, and the ship continued outbound in fine, clear weather. The navigator was alone on watch, and after checking the radar and looking out the window, he turned to the computer located aft in the wheelhouse to take care of some paperwork.

About half an hour later, the navigator felt the ship hit something, and he saw a fishing boat’s mast passing along the side.

The mast belonged to the prawn trawler Tornado, which had been fishing in the bay. At about 0828, the Tornado finished trawling and began hauling in her trawl. The skipper spotted the Edmy approaching, but figured that the larger cargo ship was not a risk, since it was broad daylight. The crew continued their work on deck without attempting to make contact with the Edmy. Several minutes later, the Tornado’s skipper realized the impending danger and put the engine full speed astern. The Edmy struck the trawler on the port bow at 0835.

Tornado was spun through 180 degrees by the force of the collision. Her bulwarks were bent, but she had propulsion. Since the crew were unharmed and the damage seemed light, the skipper returned quickly to the task of hauling in the rest of the catch. (Norwegian prawns are valued at roughly $8,000 per tonne at market.)

Aboard the Edmy, the navigator reduced speed and reversed course. He made contact with Tornado on VHF, and the Tornado’s skipper instructed him to stay clear of the fishing gear.

However, Tornado also had another problem: she was taking on water in the cargo hold. The crew tried to pump it out with a bilge pump, but the pump clogged with freshly-caught prawns. A response vessel brought out extra dewatering pumps, which the crew used to keep the flooding under control – all the while pulling in the rest of their catch. When they had their nets in, they returned to port for repairs; a drydock inspection revealed impact damage and a crack in the hull below the waterline. The Edmy had sustained only a slight dent.

The Norwegian Safety Investigation Authority found that Tornado had had her AIS turned off for most of the period before the collision, a measure taken to thwart spying by her competitors. When the Edmy’s navigator looked at his ARPA, the Tornado showed up as a radar return, but it had no AIS overlay – likely contributing to his mistaken impression that Tornado was not a target.

“The NSIA experience fishermen’s wish to not transmit their position via AIS and thereby risk revealing their fishing grounds, but by not doing so, they also remove an important digital safety barrier by not enabling other vessels to identify them,” the agency cautioned. “Active AIS transmission at an earlier stage would probably have increased the likelihood of the cargo ship identifying the fishing vessel.

As for watchkeeping improvements, NSIA cautioned against the complacent assumption that all vessels transmit AIS, which “can lead to a false sense of security.” It also noted that the Edmy’s master now prohibits paperwork or computer use when there is a sole watchstander on the bridge, in keeping with COLREGS lookout requirements. 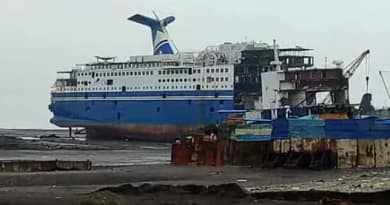