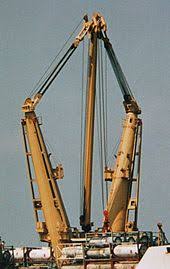 A derrick is a lifting device consists of derrick boom which is raised, lowered down and moved sideways by several different purchases.
The derrick boom is supported at it’s base and allowed to turn around as well as up and down by a gooseneck arrangement which is welded to the mast or samson post.
The load is lifted by the means of the ginfall or runner wire which is the only wire connected with the winch. The derrick is moved sideways and positioned by means of the side guys.
Once the derrick is positioned the weight is taken by the preventer guy which has to be made taut. The preventer guy is a thick wire with a chain or other easy means of securing at one end. It takes the load of the derrick and the load during working of the derrick.
The Side guys are rope purchases and are not meant to take the weight of the derrick and load during the cargo work. They should be slightly slacker than the preventer guy.
The derrick is raised or lowered by means of the topping lift.This is wound on a drum near the winch. The drum also carries a bull-wire. To raise or lower the derrick, the bull wire is wound on the winch drum, the topping lift drum in the direction desired- to raise or lower the derrick.
When in the desired positioned, the brake is lowered and the bull-wire is unwound from the winch drum. 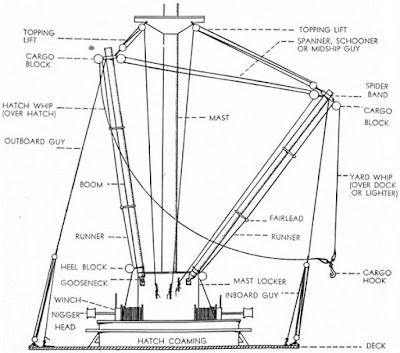 Uses of Derrick onboard Ship

Precaution and Maintenance of derrick

1. All gears must be carefully examined before use
2. Keep SWL in mind
3. All wires and blocks to be checked for any defects
4.Before a derrick is raised or lowered, all persons on deck in the vicinity should be warned so that no person stands in, or is in danger from, bights of wire and other ropes. All necessary wires should be flaked out.

5.When a single span derrick is being raised, lowered or adjusted, the hauling part of the topping lift or bull-wire (i.e. winch end whip) should be adequately secured to the drum end.

6.The winch driver should raise or lower the derrick at a speed consistent with the safe handling of the guys.

7.Before a derrick is raised, lowered or adjusted with a topping lift purchase, the hauling part of the span should be flaked out for its entire length in a safe manner. Someone should be available to assist the person controlling the wire on the drum and keeping the wire clear of turns and in making fast to the bitts or cleats. Where the hauling part of a topping lift purchase is led to a derrick span winch, the bull-wire should be handled in the same way.

8.To fasten the derrick in its final position, the topping lift purchase should be secured to bitts or cleats by first putting on three complete turns followed by four crossing turns and finally securing the whole with a lashing to prevent the turns jumping off due to the wire’s natural springiness.

9.When a derrick is lowered on a topping lift purchase, someone should be detailed for lifting and holding the pawl bar, ready to release it should the need arise; the pawl should be fully engaged before the topping lift purchase or bull-wire is released. The person employed on this duty should not attempt or be given any other task until this operation is complete; in no circumstances should the pawl bar be wedged or lashed up.

10.A derrick with a topping winch, and particularly one that is self- powered, should not be topped hard against the mast, table or clamp in such a way that the initial heave required to free the pawl bar prior to lowering the derrick cannot be achieved without putting an undue strain on the topping lift purchase and its attachments.