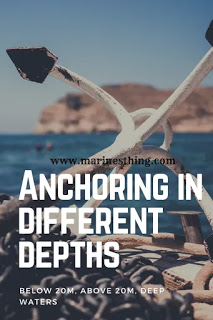 Anchoring in below 20 meter

In waters up to 20 m deep the anchor and cable should be let go on the run, allowing about double the depth (of cable) to run before checking it on the brake.
If the cable is snubbed as soon as the anchor touches
the bottom the anchor will be dragged along the sea-bed and will be unable to grip.
Further with the weight of the anchor off the cable, it sometimes happens that when the brake is released the cable will not render itself.
This happens when there is a heavy weight of cable abaft the gypsy, leading down into the locker, and when the gypsy is in need of lubrication.
By surging the cable initially, the anchor has a
chance to embed itself before the cable tightens.
There is little risk of a stockless anchor being fouled in this way.

In water of over 20 m the anchor should first be walked
back to within say 4 to 5 m from the sea-bed, and let go
from there.
This ensures that the anchor will not damage itself falling a considerable distance on to a hard bottom,
and also that the cable will not take charge and run out so rapidly that it becomes extremely difficult to hold it on the brake.
This practice therefore considerably lenghthens the life of the brake linings

In very deep anchoring depths, 50 m and over, the
entire operation of anchoring should be done under power.
The gypsy should not be taken out of gear at all,
because the heavy weight of cable between sea-bed and hawse pipe will undoubtedly take charge.
In a wind it is better to approach the anchorage
heading upwind.
The ship is more easily controlled and will make little leeway.
If the wind cannot be brought ahead, however, the ship can let go the anchor in the usual way and using her engines to relieve stress on the cable,swing head to wind as she brings-to. 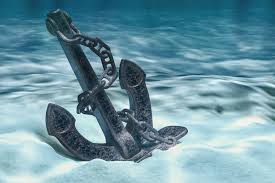 The Five Factor Guide to a Secure Anchorage

Ultimate Guide to Anchoring of Ships….Say NO! TO DRAGGING